DAY 21 - Expressing Year, Month & Date: What's the date today?
DAY 22 - Telling the Time: What time is it now?
DAY 23 - Describing daily routine: When shall we meet?
DAY 24 - Suggesting an idea: Shall we go hiking today?
DAY 25 - Expressing intention and desire: What would you like to do this weekend?
DAY 26 - Expressing Future Possibilities: Will it rain tomorrow?
DAY 27 - Expressing Future Plan and Making Suggestions: What are you going to do after work?
DAY 28 - Although Chinese is a little bit difficult, it's interesting.
DAY 29 - You are excellent!

[忄]The radical "忄"evolved from the radical "心". This radical is always placed on the left side of a character. Most characters with the radical "忄" are related to psychological and emotional activities.

As we’ve introduced in the video of “ALL YOU NEED TO KNOW ABOUT CHINESE CHARACTERS” in lesson 1, there are mainly 4 formations of a Chinese character. Among them, 80% belong to Pictophonetic characters, which are called 形声字 [Xíngshēng zì].

There are different formations of 形声字 [Xíngshēng zì] (Pictophonetic characters), and the part of 声 [shēng] “phonetic part” can appear on the left, right, top, bottom, inside or outside. The “phonetic part” of the character is highlighted in orange as below: 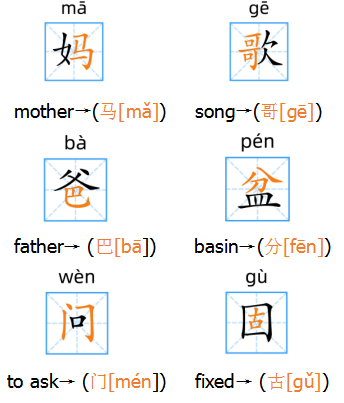 5. Look at the stroke order and practice writing the characters of new words.